Finally, that moment of the year has arrived again: the worlds best riders and horses have arrived in Paris on the Champs Elysees in order to participate to one of the most prestigious events of the equestrian world, the CSI5* Saut Hermès au Grand Palais.

For the ninth time, we have the pleasure of sitting here contemplating the infinitely agile yet highly controlled movements of the horses, watching them soar as if they had wings, admiring, holding our breath, with fists clenched or fingers crossed, willing them to succeed

While we’re waiting to see our favorite rider perform on the ring prepared by the Spanish chef de piste Santiago Varela UllastresHermès has decided to entertain us with a historical game revisited in ultra-modern key. Indeed playing is at the heart of the house of Hermès, which has chosen to celebrate it in 2018 through its theme “let’s play!”. On this occasion, Hermès transforms the traditional game of horseshoe pitching. There is now a virtual version with the h-pitchhh app launched for the Saut Hermès at the Grand Palais 2018. On your smartphones, get set, swipe!

H-Pitchhh can be downloaded on App Store and Google Play. In this incremental game, players start with five horseshoes. With a fingertip or a “full-scale” movement of the arm, they aim and pitch the horseshoe towards the stake. The closer the player gets to encircling the stake, the more points are earned, allowing them to move up to the next level. The game takes players from one universe to another, through five different worlds. Immersion in a fun, aquatic environment, climbing the stairs at 24, Faubourg Saint-Honoré, a walk in a garden… Each world is illustrated by a musical theme from hip-hop and calypso to electro and rock.

Are you ready to play and cross fingers for you favorite riders during the 9th Saut Hermès? Flyinghorse will be live at Grand Palais in order to tell you all details about this fantastic event. Stay tuned! 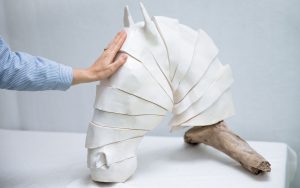 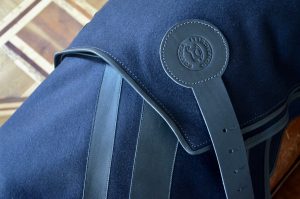 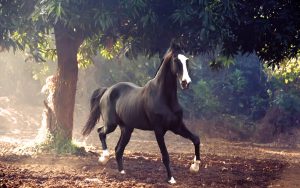