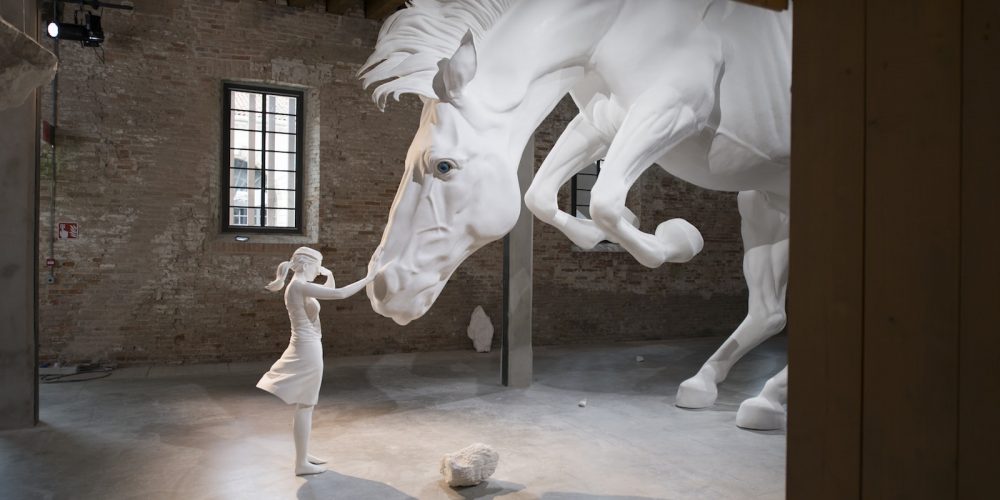 The Pavilion of Argentina located in the 57th Biennale of Venezia’s Arsenale is featuring Claudia Fontes (b.1964), one of the most interesting Argentine artists of her generation. Her work, embedded in ideas about decolonisation, takes history, nature and culture as channels of discovery towards a unique poetic language. On this occasion, she presents The Horse Problem, the work showing a bullet-time frozen scene in which a bucking horse, a woman and a young man react in different ways to a paradox: a crisis is developing, and its symptoms are, at the same time, the problem that causes it. The scene is inspired by the XIX century cultural icons around which Argentina’s cultural identity was artificially built, and challenges them with a surreal breathtaking scene that has the quality of an apparition.

Fontes gathered the ideas for the The Horse Problem from three different sources. The point of departure was the hidden presence of the horse behind the materials the building is made of. Wood, bricks and iron could only have been fabricated and transported by horse-power in the times that the Arsenale was built.

A second contextual aspect addressed by the artist is the building’s original function: the fabrication of cannons and cannonballs for the ships that were built at the Arsenale from the XIII century onwards, in what is the first historical example of an assembly line, the earliest occurrence of Fordism.

Finally, the history of La Biennale di Venezia as an institution that perpetuates the XIX century tradition of national representations, made Fontes focus on a critical approach to how the idea of nation has developed throughout history, and specifically in Argentina. In this sense, the 1892 painting The Return of the Indian Raid, by Ángel Della Valle, is a key reference for The Horse Problem, since it was the first artwork commissioned to an artist with the specific purpose of representing Argentina culturally as a nation abroad.

The Horse Problem will be visible throughout the Venice Biennale, until Sunday, November 26, 2017.